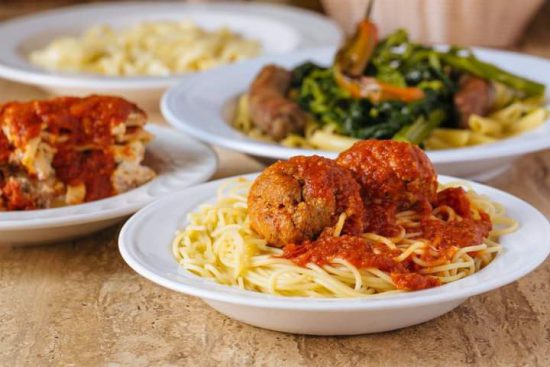 For more than 100 years Ralph’s Restaurant has been serving up Italian favorites in South Philadelphia’s Italian Market, a stint that will continue on, as declared by Elaine Dodaro, 82, who owns the restaurant with her sons, Jimmy and Eddie Rubino.

“We stick with the old standards because customers would never have us do anything different,” said Dodaro. “Don’t try and get rid of something. They’ll call you on it.”

On a recent winter’s day, Dodaro and Jimmy, 59, sat in her row home – next door to the family’s restaurant – and talked about Ralph’s, what has led to its longevity and what the restaurant means to their family. Supposedly retired, Dodaro is still at the restaurant every morning and always remains a phone call away. “There’s always a phone call for some reason,” she said.

“When I look back, my father was really, really committed, it had to rub off on me because I feel the same way,” Dodaro said. “I lived here as a child and as an adult, after marriage. My ears were always open.”

That commitment has, in turn, been handed down to her sons and their children. “My grandfather made it very obvious (to my mother, while she was growing up) the sacrifices that have to be made for this restaurant,” Rubino said. “Then, my mother passed those values on to me and my brother. We understand that there’s something bigger than just us and our personalities. Occasionally, an argument had to be set aside because the show must go on. Eddie and I passed that on to our children, how important this restaurant is, and they get it, too.”

Dodaro has done almost everything at Ralph’s from keeping the books to dishwashing to cleaning. But she has never cooked at the restaurant. “My grandfather had a weird policy back then that it just had to be men (cooking),” Rubino said. “Now, things are different. We always had chefs along the way, so I never really had to get involved.”

At home, Dodaro enjoys sitting at her own kitchen table and enjoying the food that she’s made. But that doesn’t mean that she won’t run next door when she doesn’t feel like cooking to get something for herself and her husband, himself a longtime chef at Ralph’s.

As for her favorites, whether from the restaurant or homemade, Dodaro said, “The truth of the matter is, I’m a real Italian. I love anything to do with macaroni or pasta. I don’t care what’s on top of it, but I’m a pasta person.” While the Italian classics are Ralph’s bread and butter, so to speak, the restaurant’s menu has seen other fare come and go and come again, depending on food trends. For example, 60 years ago, tripe, sweetbreads and organ meats were standard menu items. Then they fell out of favor. Once trendier restaurants began offering the food in recent years, so did Ralph’s and now the customers can’t get enough of it. Another way that Ralph’s has changed with the times is the way the restaurant advertises. For most of Dodaro’s years, print advertising was all it took to get the word out. Now, most advertising is online, and beyond the expertise of Dodaro, who is content with her vintage flip phone. The hours were long and the work hasn’t always been easy, but Dodaro said, “I always say there are people that wish they could be in my shoes. I am so lucky and proud of my family, you can’t imagine.”

Directions:
Dredge chicken in flour. Sauté chicken in oil in a large frying pan, about 3 minutes per side. Drain oil from pan. Add butter, rue and wine to the pan (to make the sauce). Bring to a boil, then lower flame and simmer for 4 minutes, stirring constantly. In the pan, layer 3 pieces of mozzarella in each piece of chicken and put into the broiler until cheese is melted; about 1 minute. Plate chicken, then put the pan back on the stove to quickly bring to a boil and whip the sauce. Spoon the sauce over the chicken and serve.

Rue:
Add flour and bouquet to mixing bowl filled with water while whisking. There mustn’t be any lumps. Bring the chicken broth to a boil and whisk in flour mixture. Allow to cool and refrigerate for up to 2 weeks, or freeze as needed.

Directions:
Squeeze excess water from bread and add all ingredients to a large mixing bowl. Use your hands to ensure everything is well mixed. Roll into meatballs, a bit larger than a golf ball. Typically, this will yield 12-15 meatballs. Heat the oil in a pan on a medium flame. When oil is hot, add 6 or 7 meatballs to the pan ensuring there is room between them to cook evenly. Cook for about three minutes, then rotate and do the same to the uncooked side. Place cooked meatballs on a brown paper bag to drain excess oil.