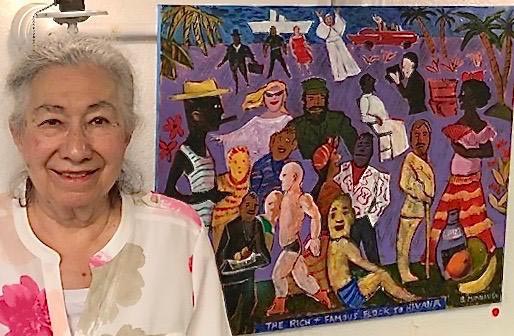 The Plastic Club in Center City has been a home for artists working in all media, including painting, drawing, sculpture, printmaking and fiber arts, since 1897.

The club will receive a historic marker outside its home at 247 S. Camac Street on May 21 at 10 a.m. Over the course of the year, there will be other programs and exhibitions in celebration of the club’s 125th anniversary.

The term “plastic” refers to the state of any unfinished work of art, as suggested by the club’s first president, Blanche Dillaye.

“The original intent with founding the club (was) to bring artists together so that they could exchange ideas and work together and find out about things that are happening in the arts in a communal way,” said Michael Guinn, 78, membership chairman. “We’re still doing that same thing. It’s a very inclusive club.”

Guinn, a retired graphic artist who joined The Plastic Club in 1999, adds that all artwork is viewed equally. “If you want to put a picture into one of our shows, it would get hung. They all get hung. They’re not judged or rejected in any way.”

When the club was founded, only art clubs for men existed in the city. Women artists had no place to meet, exchange ideas and exhibit their work. The founders wanted to create a space for women artists that would bring together experienced, successful artists and younger artists who were just beginning their artistic careers. In March 1897, Emily Sartain, principal of the Philadelphia School of Design for Women (now Moore College of Art), hosted an organizational meeting of The Plastic Club at the school.

During its first year, the club held six exhibitions, representing 15 different mediums, including the first exhibit in Philadelphia of Japanese color prints.

The all-volunteer club opened to men in the 1990s and now has more than 230 members. It offers weekly drawing workshops; monthly all-media exhibitions; and film, dance, music, and poetry programming.

Betty MacDonald, 95, of Narberth, joined The Plastic Club in 1953 and has been a continuous member for 69 years. Over the years, MacDonald has served in many volunteer roles and has won her share of awards. “I get to show my work every month,” said MacDonald, who works in many mediums, including oils, watercolors and printmaking. She enjoys the club because of the people she meets and the opportunities it offers. “I get to try things out and see how they work.”

The club attracts a lot of retirees who have art talent but didn’t have time to develop it while they were working and raising a family. “This club gives (artists) a place to show their work,” said Guinn, an oil painter. ”It’s very nice for older people because they’re welcome. Anybody can come to the workshops.”

Call 215-545-9324 for more information about The Plastic Club, or visit PlasticClub.org.

PHOTO CAPTION: Artist Barbara Mimnaugh at The Plastic Club with her painting, “The Rich & Famous Flock to Havana.”