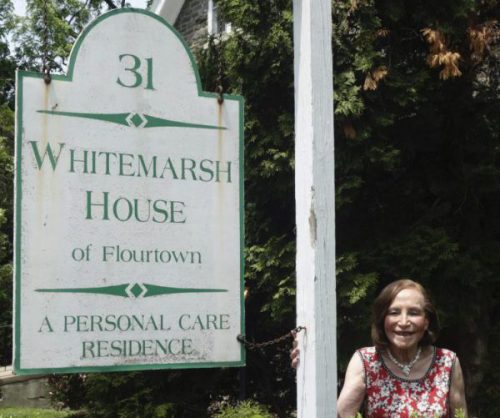 Each year, approximately 800,000 Americans suffer a stroke. And with every stroke, every second matters.

Located in a quiet neighborhood on West Mill Road in a 200-year-old Victorian home complete with a wraparound porch, residents get individual treatment programs in a residential setting.

Through her personal and professional dealings, Mazer is known as “The Stroke Lady.”

Her late husband, Howard, was a surgeon at South Jersey Regional Hospital. On July 18, 1989, he suffered a ruptured brain aneurism while operating and blood was coming out of his head. Howard was flown by a medical helicopter to Thomas Jefferson University Hospital.

“In the morning he kissed me goodbye,” said Mazer. “He was 48 and seemed perfectly fine. At about 10 a.m., I got a call from the hospital.”

Howard was in a coma for three months and on a ventilator for eight months. He spent a year at Jefferson, then six months at Magee Rehab. During that time, Mazer, who has a master’s degree in public health, turned her attention to the neurosciences. She spent more than a year researching stroke and brain injuries, then parlayed her knowledge into working at the Jefferson Stroke Center as director of stroke neuroscience outreach development, where she spent the next 22 years.

Mazer received $100,000 from Johnson & Johnson to establish a nonprofit to change the perception of stroke throughout the region. With this grant, the Delaware Valley Stroke Council was formed. She also joined the Board of Directors of the National Stroke Foundation.

“It was my vision that things had to change and there had to be a better way in terms of stroke treatment,” she said. Mazer went to all the major teaching hospitals in Philadelphia and 35 other hospitals in the region to explain the symptoms and critical timing necessary to treat stroke victims. (See below page for more information.)

“Initially, if a patient went into Chestnut Hill Hospital they called the Jefferson Stroke Team to get a stroke professional to make a diagnosis through telemedicine,” Mazer said. “If they needed an intervention, we worked with the helicopter companies in the region to bring them to Jefferson. Telemedicine really changed the way stroke is viewed and treated all over the country.”

At the end of 2015 she decided to retire, but didn’t take to the lifestyle. One morning in April 2017 she saw a small ad in the newspaper for someone with a background in Traumatic Brain Injury
and neurology. She secured an interview at Whitemarsh House that afternoon and met with Executive Director Lawrence Anastasia. Mazer was offered the community outreach director job the next day.

“He knew I knew what I was doing and had connections through the Delaware Valley Stroke Council and that I knew all of the discharge planners,” she said.

Mazer is a strong believer in engaging residents and integrating them into the community. “They come to the main house for meals and participate in a structured, individualized day program of activities,” she said. “They are not just sitting around watching TV. It gives them purpose.”

Mazer sees herself as an advocate and educator.  “What happens with most people is that after they’re sent home, families may not be able to handle their needs,” she said. “They aren’t the same person they were before the stroke, auto accident or head injury. I work with them and the office of Long-Term Living to get them set up for a waiver program and help them through the admission process.”

As for Howard, after about five years, he was able to use a computer and do the family finances again. “It wasn’t all roses, but he did have a quality of life and that’s important,” Mazer said.

It’s important that people who’ve had a stroke don’t feel that their lives are over. Try to integrate into the community and develop individual goals.

“I feel that my mission in life and the reason I was put on this earth is to help those people who have been neglected and need me,” said Mazer, who declined to give her age. “You can say I’m post-retirement age, and I’m going to stay with Whitemarsh House until they carry me out.”

Take action FAST at first signs of a stroke

With some minor health problems, you’re fine to take a wait-and-see approach. Everyone gets the occasional ache or pain that goes away on its own. But when it comes to stroke, there isn’t a second to spare.

Stroke cuts off blood flow and oxygen to the brain. The longer your brain is deprived of oxygen, the more brain cells die and the more damage occurs. Quick treatment can save your life and prevent long-term or permanent damage.

But how can you spot a stroke? Just think FAST, an easy-to-remember acronym for the key signs of a stroke and what to do:

Face drooping.
Does the person’s face look lopsided? Is it numb? Ask them to smile. Is it uneven, or drooping on one side? Answer yes, and you’ve got a stroke symptom.

Arm weakness.
Is one arm weak or numb? Ask the person to raise both arms in the air. If one arm drifts downward, that’s another sign.

Speech difficulty.
Ask the person to repeat a very simple phrase, such as “The sky is blue.” Can they do it? Is their speech slurred or hard to understand? Yes could mean they’re having a stroke.

Time to call 911.
If you see any one of these signs in yourself or another person, call 911 right away. Even if you’re not totally sure or the symptoms go away, it’s important to call and make sure to say, “I think this is a stroke.” Note the time. Medical personnel need to know when symptoms began because it affects treatment. Most strokes are caused by a clot. When that’s the case, the drug that works best needs to be given within 4 1/2 hours of when symptoms began.

Author and speaker Barbara Sherf captures the stories of businesses and individuals.